Write about your strongest memory of heart-pounding belly-twisting nervousness: what caused the adrenaline? Was it justified? How did you respond?

Despair seeps through walls like the ghost of a loved one, and wraps round your heart, and lungs, choking the air and numbing the senses until all you can see is a blurred tear-filled void, where happiness once lived.

I knew it was bad news about Dad when I walked into the room and saw my mother cradling my little sister’s head to her chest, and both their wretchedly anguished faces, streaked with tears. Mum didn’t want to tell me, I could see it in her eyes. But she knew if she didn’t my sisters would, not that it would have made a difference. The blow was like a blunt instrument to the head, regardless.

“Dad’s in the hospital, intensive care,’ Mum told me as gently as she could,’he crashed the Holden on Top-Grass Road on the way home last night. His dog died.’

I told him not to drink and drive! I told him he would have an accident! But what would I know, I was just fifteen.

Mum took us to see him. He’s alive, just be grateful, he’s alive. His face was swollen to almost twice its normal size, with a big gash through his stitched lip. He looked like the Elephant Man… like a stranger. His leg was broken and in plaster, his neck in a brace, his jaws wired shut, a drip in his arm and a machine that went … beep.

I sat in the hall outside his room for three days and cried rivers on the floor.

‘Don’t worry Love,’ Grandad told me, ‘you’re having a worse time than he is right now. He’s got no idea what’s going on.’

‘Would you like to sit in the Chapel for a while?’ a kind Nun said. I wasn’t a church goer. But I prayed my wee ass off that week.

He had to be placed in an induced coma for weeks and weeks, apparently. I couldn’t say, my memories fail me at that time because my emotions were keeping him company in that coma and my mind had no room for anything else in those long weeks.

He eventually awoke, rudely demanding someone get him a beer. When they couldn’t understand him, he forced his jaw until the wires broke, and we laughed, because we were worried he’d be brain damaged, and not the man he was. Asking for a beer was proof that Douggie was still in there…somewhere, in some form.

He had to learn to walk again. My big brave truck-driving father became a spindly weak man who I probably could have lifted off the chair, myself. The knock to his head gave him double vision, and he had to wear an eye-patch looking like a cack-eyed pirate.

But when the bully at school decided to punch me in the face, and I got little sympathy from my mum when I told her, ‘you should’ve hit her back,’ she’d said; I walked all the way to the hospital, and cried on Dad’s shoulder because I knew he’d always understood me and he lifted his skinny weak arm, placed it on my shoulder … and I knew, he was still my Dad.

Given the amount of lonely hearts out there searching for their perfect love, and the stories of poor depressed souls just having enough and taking that final trip to that mysterious distant shore where no -ones ever returned from to tell us about it, I felt the urge to spread a little happiness, you know, like that wee fairy does with her glittery dust.

I’ve loved and suffered from love, more times than I care to admit. But mostly, it was my own choice to get out of a relationship that just wasn’t healthy for me. I don’t regret those choices, and I’m not carrying any residual bitterness about them. But there were definitely some hard times and many tears shed, before I could get to my ‘happy place’ once again.

When I found I was feeling down, first I made a list of things I’m good at and that I liked about myself, that others also liked about me ….Do this and read it every-time your self esteem is dropping. Sure, allow yourself a short period of therapeutic indulgence in a few wines or chocolate or big bowl of icecream … and a good cry with your friends (lean on those friends, that’s what they’re there for, and many of them have probably been through the same sort of thing). But just don’t allow yourself to wallow for too long, because the best revenge for having had your heart ripped out by someone cruel, is to pick yourself up, get your shit together and find a way to be happy again.

Then another list I make, is of the things I used to love to do, before I devoted all my time to ‘him’ – such as bubble baths with chocolate and a glass of wine, such as dancing wildly to my favourite music really loud (if you have children, use an ipod and earphones, you can have you’re own little private party and get a great work-out at the same time), watching all the movies I wanted to watch instead of settling for what ‘they’ want to keep them happy, reading a book in bed without being constantly annoyed or distracted by your partner like a toddler demanding attention because your in bed and not pleasuring them instead,  like treating yourself to get your hair done or buy a new dress …. instead of feeling guilty about spending money that you need to pay bills with because he can’t or won’t find work again and so its up to you to keep the boat afloat? Does any of this sound familiar to anyone out there? I’m picking by the amount of singles on the online date sites, it just might.

Get yourself out of the house. Outside in the fresh air, not if it’s pouring down (unless it’s not too cold then a dance in the rain, can do wonders for your mental health), go for a walk, look around. Plan a trip, go camping, visit people you may have lost contact with over the years. Change is good. Change is necessary. Species don’t evolve without coping with a bit of change. As Steve Winwood sang ‘roll with it baby!’

Do up part of your house, paint something a bright happy colour, buy a new duvet so the bed is ‘yours’ again. Bottom line, fall out of love with the jerk who hurt you, and fall ‘in-love’ with yourself again. You’re worth it, you deserve it.

After all, we all came into this world alone, and we will be leaving it alone, so being single when you think about it, is not really such an unnatural state to be in.  And there are way worse things than being alone, … losing yourself to a loveless marriage for one.

Although I’ve yet to visit this wonderful place, Scotland calls to my Celtic blood, like migration calls to the birds. I think I’ve been born to the wrong century because technological advances don’t excite me as much as a magnificent roaring fire in a big old cold castle. Then there’s always the kilts… forget plastic surgery guys, get yourselves a kilt and I can pretty much guarantee you’ll be getting some gooooood lovin’ tonight!

My family roots, apparently originate partly from the Orkney Islands. I must say, that doesn’t really come as much of a surprise to me as I have been know to possess a little of the Viking Berserker at times, especially when someone tries to hurt one of my loved ones.

Even the language sounds sexy … don’t you think? Apart from Spanish, and possibly French, I think  it’s one of the sexiest sounding accents.

The food, well I won’t pretend to kid anyone by saying the idea of eating Haggis gets me going (except maybe going out the door for some important errand I just invented to avoid consuming the scary sounding stuff). But I’m a big fan of porridge, and the occasional whiskey is also rather therapeutic.

The land is ruggedly beautiful (just like I like my men) and the Loch’s seem to have an air of wildness and mystery about them; no wonder the Legend of the Loch Ness Monster have survived so many years. It’s easy to believe, and I haven’t even stood on those shores yet. Maybe I did once, in a past life many years gone by?

Of course another great draw to Scotland would have to be the love of my favourite book series, Outlander by Diana Gabaldon. Her writing is so alive, so 3-dimensional, you can feel the mist on your cheeks and smell the gun-smoke on the air. Along with adventure, wonderful humour and learning about history without being bored shitless, her stories tell a love story that I guarantee every passionate woman on earth has dreamed of finding, but very few of us ever have. She is up to her eigth book in the series Written in my Own Hearts Blood, and it’s more eagerly awaited then the second coming, in my opinion.

I will get to Scotland one day, if I have to sell everything I own to do it. My life will not be complete with out setting foot on her proud shores, where I think my heart will finally feel it has come home at last. 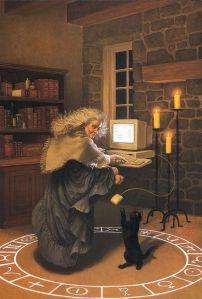 Oh the pure, unmitigated, childlike joy of being over 40 (no, wait that’s not the joyful part), of being able to sort one’s own technical computer issue without the need to resort to begging assistance from one’s patient if sometimes a little condescending, yet thoroughly knowledgeable teenage daughter for help again!

I still think computers are the absolute bane of our existence, and that we’d all be a lot less stressed and more sociable without their existence, BUT just for today, that’s one win for me!!

When the TV is blaring, the kids are scrapping, the dog starts barking and …. there is no wine in the fridge …. Don’t you just hate your life?

Who has some good stress relieving strategies for winter days inside with bored and boisterous kids?

Loud music and dancing is one of my favourites… I’d appreciate any more that don’t involve spending screeds of money.