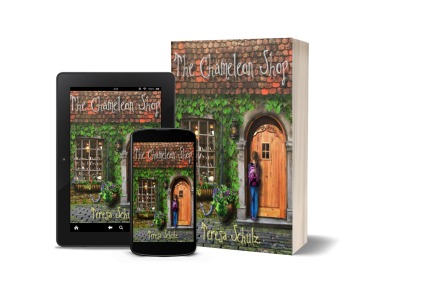 The Chameleon Shop Book One

This is the exciting finale of the Chameleon Shop trilogy. With the aid of the magical key and the mysterious Chameleon Shop, Kaylee returns to the Five Realms, bewildered mother in tow. She hopes to help her new friends defeat the wicked Guardian, Wilfrey Hobbs. Hobbs, livid at the fact this girl from the Other Lands keeps messing up his ruthless plans, vows to unleash every creature of evil at his disposal and bring chaos to them all. Will Kaylee and her family be able to save them?

Available at Amazon.com Kindle and  Paperback

The second book in The Chameleon Shop series out now at Amazon.com http://amzn.to/28MtXPN

After an exciting adventure in the Five Realms, Kaylee Browne has just returned home to Feilding, through the magical Chameleon Shop, which to her surprise, has now become a chocolate shop.

Unless she returns to the Five Realms within seven days, her father will be put to death. Kaylee also fears for all her new friends in the Realms such as Jett the giant Messenger Cat and Gerard the gentle giant.

Although she dearly missed her mother, her return is bitter-sweet, having almost completed her Quest in the Five Realms, only to be thwarted at the last minute by Wilfrey. Knowing she must go back home, Kaylee has mixed emotions. Somehow she would rather face the Dragon in the Five Realms again, instead of the familiar one who was waiting for her at home.

The Chameleon Shop Book One

The Chameleon Shop book one can be found at Amazon.com on this link Kindle https://amzn.to/2QLGGG3  Paperback http://amzn.to/1GqMX07

also first in the series FREE at D2D https://books2read.com/u/m0zvyA and also Smashwords https://bit.ly/1asOnvg

Feel free to post a short review if you enjoyed the story. 🙂 Genuine feedback is the greatest thank you an author can receive.

Although not something I would usually read, I soon found myself being whisked away on a delightful and exciting adventure. The characters and the setting are all original and unique. I will definitely be reading this to my grandson on his next visit. I look forward to the next book in the series.
5.0 out of 5 starsI loved the cats

This was a very original story, quite a different twist on the usual fairy tales and fantasies I’ve read. Funny in parts, and exciting. Reminded me of Inkheart or Willow. I was given a free copy of this book for an honest review
5.0 out of 5 starsI read this book aloud with my eight-year-old son. …

I read this book aloud with my eight-year-old son. We were both enchanted with the memorable characters, the mythical landscape and the suspense created as the plot twisted and turned. The ending is cleverly handled, and we look forward to the next book in the series.

Aug 06, 2016 Janet Miller rated it  4 STARS   really liked it  ·  review of another edition
This was a great read for children and young adults (I enjoyed it too and will recommend it to my granddaughter). There was plenty of action to keep things moving and humor and great characters. I will be looking forward to the next book.

– Lanky twelve-year-old Kaylee Browne visits a new bookshop in her home town and discovers there a very curious ancient book. The book holds an even more curious iron key. Her desire to learn what they are for leads her on a magical journey to a whole new world – The Five Elemental Realms – where she finds something more than answers to her questions, including new friends, new enemies, and a dragon’s egg which she must acquire to save someone very dear to her.

Once upon a time … in a little town called Feilding, there was a twelve-year-old girl called Kaylee Browne.

Kaylee hung upside down from her swing, her mousey-brown hair hung, dangling in the grass. Her head throbbed from all the blood rushing to it. The thick tree trunk beside her flowed down into maze of branches, with the sky a sea of pale blue with white fluffy clouds peeking between them.

As she gazed vacantly, a strange piece of paper fluttered down between the branches to the grass at her nose. Eagerness and curiosity made her let go of the ropes she’d been holding and she slid ungracefully to the grass, bumping her head quite hard on the ground. She sat up rubbing it, annoyed and crossed her long gangly legs, only to have the wooden swing meet the back of her head rudely with a hard ‘thunk’. She scowled and grabbed it, letting go once it was still.

Tuning out on the sounds of grown-ups shouting from inside her house, she began to read the old pale-brown looking paper.

NEW BOOKSHOP OPENING IN THE SQUARE TODAY. IF YOU FEEL LIKE GETTING LOST IN A STORY AND VISITING STRANGE LANDS, JOIN US.

FIRST BOOK FREE TO THE FIRST THREE VISITORS. WE HOPE TO SEE YOU THERE.

Kaylee listened to her mother’s boyfriend, Paul, shouting at her mother, Trish, about the tea-set Kaylee had accidently smashed. It was a gift from him and he suspected she had done it on purpose.

Kaylee wished her father was still around. She still hadn’t accepted he was dead after the explosion in the mine six months ago, where he had worked. They had never found the body after all.

She loved her mother dearly but felt so lost and alone sometimes.

With the old piece of paper still in her hand, she grabbed her backpack from where it lay on the lawn and began walking to town. It was only a small town, so fifteen minutes of pounding the pavements with her red Chucks and she would be at there.

She had worked up quite a sweat by the time the quaint little shop came within sight. In a dark, narrow street it stood. It had an old stone exterior and looked squashed in there, like a skinny man wedged between two Sumo Wrestlers on a bus. She’d never noticed it before even though she’d lived in this little town since further back than she could remember.

A little bell somewhere out the back of the shop tinkled as she came through the door and that glorious smell of old books ─ organic compounds breaking down and releasing that intoxicating scent of ancient wisdom, paper, ink, glue and sometimes smoke ─ wafted over her, bathing her in its almond, vanilla and floral deliciousness.

As her eyes adjusted to the dim light, she saw ahead of her tall shelves standing in three lines down the centre of the narrow shop, chock full with row upon row of books. She wandered in, wondering absently where the owner was and gazed around the various spines of the books there. Many books were leather bound, mostly very old and intriguing.

There was no obvious order to separate subjects. Well this is going to be interesting, she mused.

Eventually, she reached up and grabbed the oldest book she could see. She loved ancient books, the ones where you could smell the old leather and the covers were a little cracked and rumpled round the edges, the writing usually in gold lettering and a fancy font.

The title on the cover said Journey to the Five Realms. The book was not overly large but was quite weighty. A musty smell wafted off the pages as she opened it. The first page said:

To find your heart’s desire,

trust in the key of fire…

‘Well, that’s just weird,’ Kaylee muttered to herself. She heard slow shuffling footsteps and looked up to see a hunched old man appear from somewhere out back of the shop. He had sparse wisps of grey hair, which seemed to float on top of his balding crown. Kaylee noticed he walked with a bit of a limp as he made his way towards the front counter ─ a thick dark brown slab, tucked away in the corner to her left.

He gave her the strangest of looks. A smile, but not just a friendly, how are you sort of smile. It was kind of an, I know you from some place, sort of smile.

That is just ridiculous she thought. She was about to say something to him, ‘Ah, excuse m…’, when a small breeze from somewhere out back blew open a few more pages in her book … revealing a large ancient-looking key.

The key was a little rusty and made from a dark-brown metal, like her mother’s cast-iron pans at home. It sat nestled in a groove cut into the pages of the book, made precisely to fit. The top of it was a beautiful intricate Celtic-knot pattern. No wonder the book had felt so heavy.

‘Can I be helpin’ you at all there, dear?’ the hunched owner asked, causing Kaylee to start as though caught doing something bad. She slapped the book shut and looked up guiltily.

She approached the counter, raised the book above her head and said, ‘First three people get their books free, the flyer said?’

He nodded, ‘Yes, that’s correct. And before you ask me, yes, you are the lucky third person in today. If that’s the book you’ve chosen, there is no charge my dear.’

She smiled, ‘Thank you.’ Now that he had said she could have it, she was burning with unanswered questions about the key within those old pages. ‘You don’t by any chance happen to know what the key opens.’

‘A key you say? No, sorry, can’t really say that I do. But if you get your parents,’ he paused and looked at her a little strangely when he said this, as though he knew she had no father now, ‘to take you along to Mitchell’s cottage on the weekend; the tour guide Fred is an old friend of mine. He’s a blacksmith, familiar with old keys and such. He might be able to help you with it.’

Kaylee thanked the strange man once again, tucked the new, old book in her backpack and hurried home to ask her mother if they could go to Michell’s cottage this weekend. She was sure her mother would take her. After all, the original owners of the cottage had apparently been some ancestor-or-other of theirs, way back in the 1800’s.

She was in such a good mood now, she doubted even Paul could dampen her spirits when she got home.

How wrong she was.